The New York Attorney General’s office and federal government are investigating after the Food and Drug Administration (FDA) received complaints and claims that the comsuming the 5-Hour Energy drink has led to 13 deaths and 33 hospitalizations over the past 4 years, according to ABC News on November 15, 2012

According to Bloomberg Businessweek News. An FDA spokeswoman, said yesterday in a telephone interview. The death reports from drinking 5-hour Energy, are open cases being investigated by the FDA, she said. The Five-hour energy drink, manufacturing by closely held Living Essentials LLC, has been accounted with the 92 adverse reports in that time, including 32 hospitalizations. 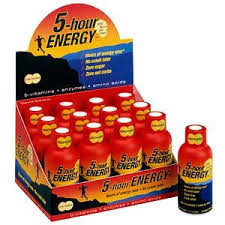 Monster energy drinks, 5-Hour Energy, and others competing products are all being targeted by lawmakers, including Illinois Democrat U.S. Senator Dick Durbin, who wants caffeine being regulated on the beverages after emergency hopitalized visits involving with such drinks increased 10-fold from 2005 ~ 2009. Last month Regulators said drinks from Corona, California-based Monster have been cited in the deaths of five people in the past year according to reports filed voluntarily by doctors and companies with the FDA.

The 5-hour company “is unaware of any deaths proven to have been caused by the consumption of 5-Hour Energy,” Farmington Hills, Michigan-based Living Essentials said. “It is important to note that submitting a serious adverse event report to the FDA, according the agency itself, is not construed by FDA as an admission that the dietary supplement was involved, caused or contributed to the adverse event being reported.”. Living Essentials said yesterday in a statement “5-Hour Energy is classified as a dietary supplement that boosts energy and isn’t marketed as a beverage”. The manufacturers also point out that these are just claims, and there is no proven link between the drinks and the deaths.

Many experts say the fatal dose of caffeine for an adult would be almost impossible to drink, Ones has to consume actually 50 to 60 times of what is contained in an energy drink. But for children with underlying heart problems the energy drinks may be more hazardous than coffee. The popular 5-hour energy shot comes in 2 oz. packages and packs a powerful caffeine punch, equal to two cups of coffee. “If someone is to use multiple cans, now is when we start to see some of the side effects,” Dr. Sean Patrick Nord, USC Director of the Section of Toxicology, told ABC News.